This road trip will take you to ten NC lighthouses. You’ll even get the adventure of hopping on a ferry to get from one lighthouse to the next!

Plan your route using Carolina Traveler’s NC Lighthouse Map below. Most of these stops offer seasonal lighthouse tours or opportunities to climb the lighthouse stairs. Read on to check out some details for each stop on your journey.

Located in Corolla along the Outer Banks of North Carolina, Currituck Beach Lighthouse is still a functioning guide for ships today. In fact, the light can be seen at a distance of 18 nautical miles.

The Currituck Beach Lighthouse was commissioned in 1872 after hundreds of ships were lost to the treacherous waters off the Outer Banks coast. It was finished in 1875 with a lightkeeper’s home added a year later. 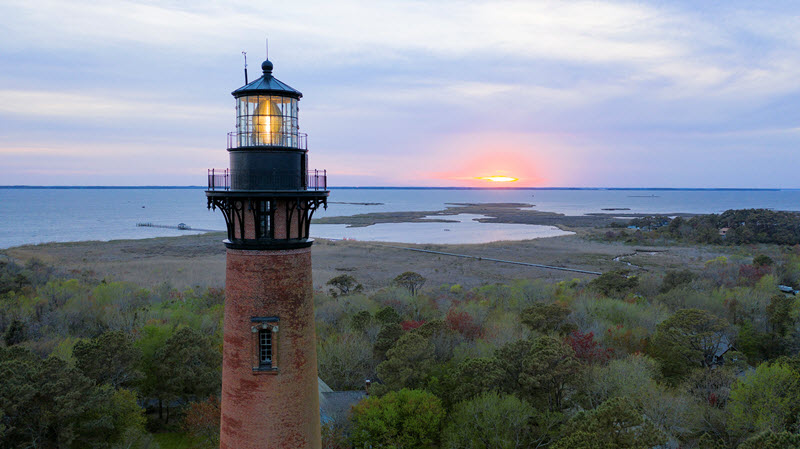 Kick off your NC lighthouse tour in the quaint Outer Banks village of Corolla, at the Currituck Beach lighthouse.

The red brick exterior provides a unique look to the lighthouse, which allows mariners to distinguish it from other OBX lighthouses. Standing at 162’ high, the interior has 220 steps to the top. The views from the top are incredible, offering a glimpse at the Whalehead in historic Corolla, the Atlantic Ocean, and the Currituck Sound.

Drive south out of Corolla and continue around the Albemarle Sound to visit the Roanoke River lighthouses.

In the late 1800s, there was a system of twelve screwpile lighthouses that helped mariners navigate the complex system of sounds and waterways that lie between the Outer Banks and the North Carolina mainland. None of these lighthouses remains at its original station, and only the Edenton lighthouse is still intact. Screwpile lighthouses were constructed on top of wooden piles that are screwed into muddy or sandy ground. 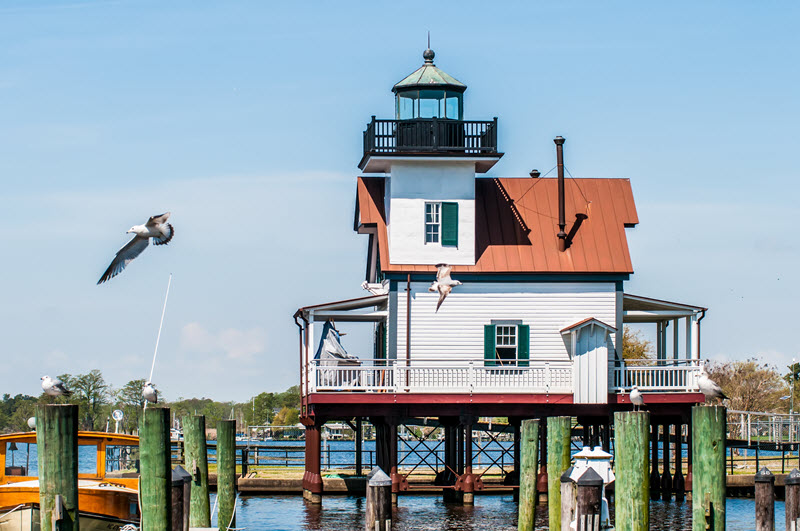 The Roanoke River Lighthouse was originally built in 1886 and stood at the mouth of the Roanoke River. It was moved to it’s permanent location in 1955 and for many years it was kept as a private residence. Now, it is restored to its historic condition and is open for tours. It’s a short walk from downtown Edenton and an excellent place to take photos of Edenton Bay. 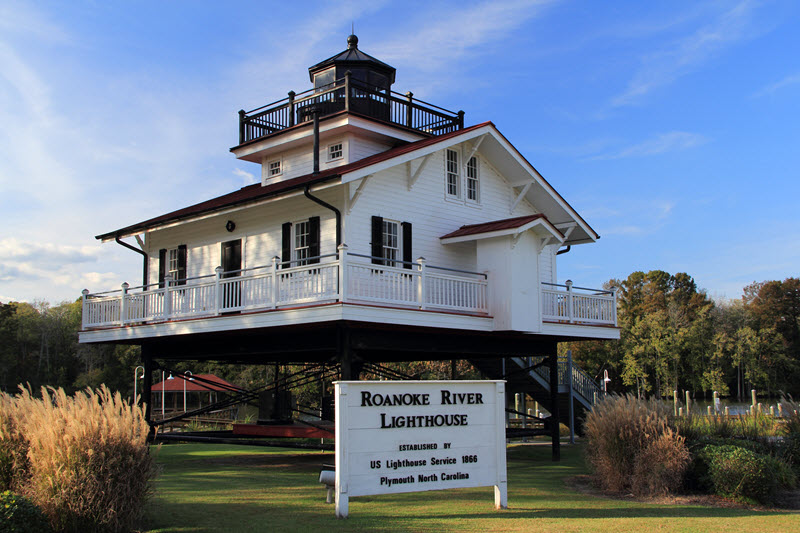 This lighthouse is a faithful reproduction of an original Roanoke River lighthouse that was near Plymouth, NC.

This faithful replica is the second of three significant Roanoke River Light Stations. The first, built by the United States Lighthouse Service in 1810, was a three-masted lightship stationed near the river’s mouth. Sailors used whale-oil lamps with red, green, and blue lenses to find a safe passage to the river. When Union forces invaded eastern North Carolina in 1862, Confederates took control of the lightship and sailed it up the Roanoke River, where it was later sunk. Historians believe the station was hauled upriver and wrecked with other vessels to prevent the renowned ironclad Ram Albemarle from passing. 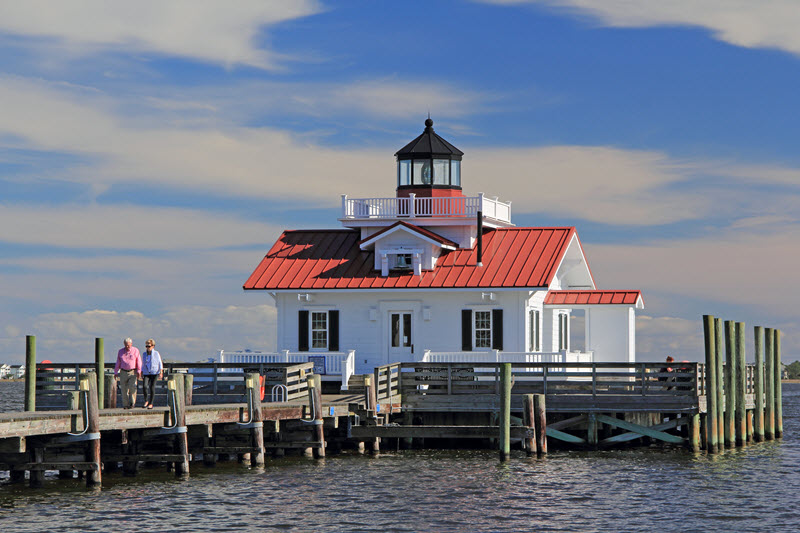 Loop back to Manteo, NC, in the Outer Banks to tour the last of the Roanoke River lighthouses.

The Roanoke Marshes Lighthouse, has been reconstructed and placed atop pilings just offshore from the town of Manteo on Roanoke Island, where it is easily accessible via a short pier. The actual Roanoke Marshes Lighthouse was not reached so easily as it stood offshore between the southern end of Roanoke Island and the mainland, where it served to mark the southern entrance to Croatan Sound from Pamlico Sound.

From Manteo, the North Carolina lighthouse tour continues south along the Outer Banks. 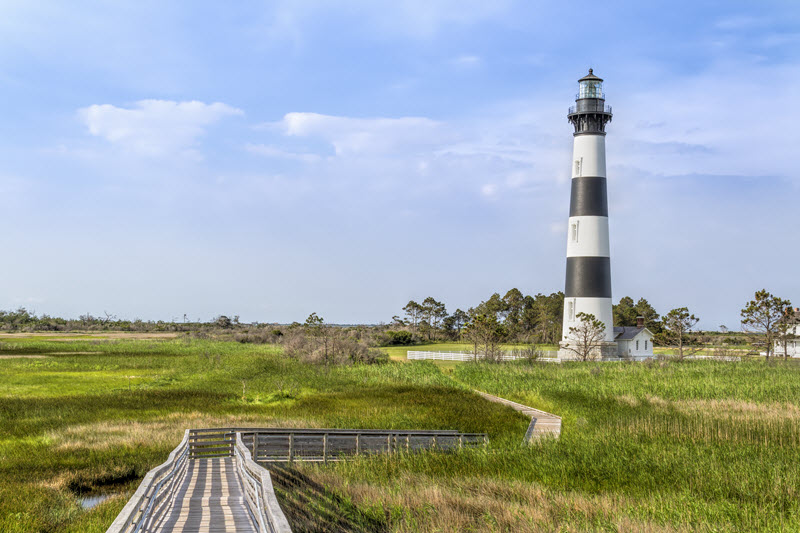 Distinguished by its black and white stripes, the Bodie Island lighthouse is open for lighthouse tours.

The beautiful black-and-white striped Bodie Island Lighthouse (pronounced “body”) draws crowds of tourists every year. A recent restoration project from the National Park Service has ensured that visitors will be able to continue enjoying this historic site for years to come.

The Bodie Island Lighthouse was built in 1871, but had several foundational issues. The current lighthouse is actually the third iteration. The second was destroyed by retreating confederate troops who wanted to keep the lighthouse out of the hands of the union troops.

Today, you can reach the top of the lighthouse by climbing 214 steps. It is one of only a few brick lighthouses that remain in operation in the US.

The lighthouse is open for climbing mid-May to Columbus Day, 9-5:30. Climbing tickets are $10, $5 for seniors and children, and must be purchased in advance the day of the climb at www.recreation.gov. 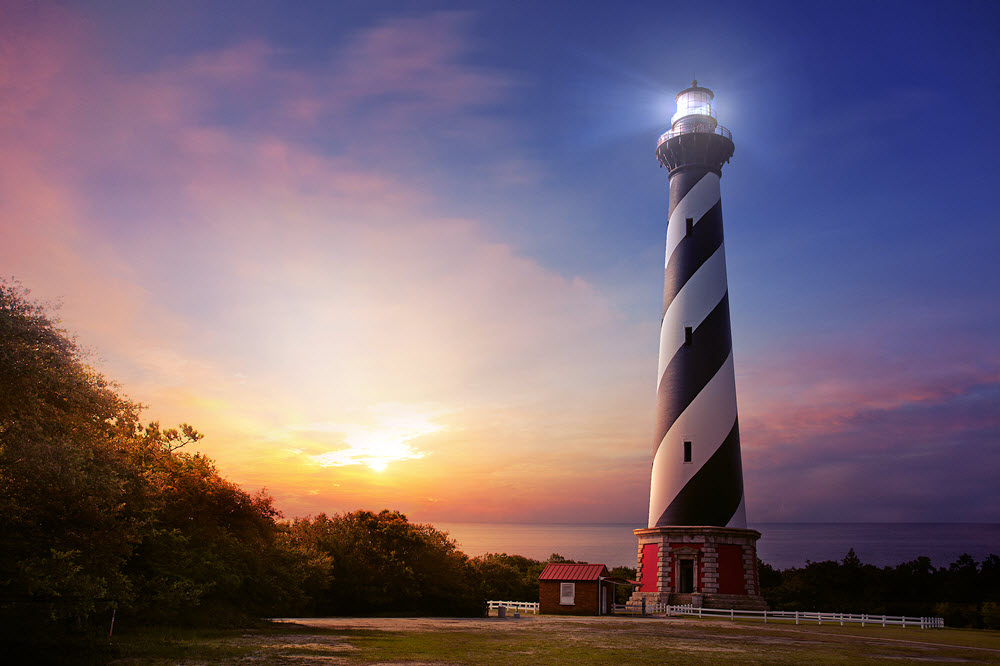 The Cape Hatteras Lighthouse marks one of the Atlantic Coast’s most dangerous stretches. Just off the coast, the Gulf Stream collides with the Labrador Current from Canada. This current draws southbound ships onto Diamond Shoals, a treacherous twelve-mile-long sandbar. Hundreds, if not thousands, of shipwrecks have given this area the moniker “Graveyard of the Atlantic.”

The original Cape Hatteras Lighthouse built in 1794 was only 90 feet tall and was not able to be seen by ships along the coast. The Lighthouse Board agreed to increase the tower height by another 60 feet in 1853, but by 1860 the lighthouse required extensive repairs. Construction was started on the current lighthouse in 1868 and it was completed in 1870. The old lighthouse was demolished in 1871.

Years of beach erosion and unsuccessful attempts to stabilize the beach made it necessary to move the lighthouse in 1999. Over the course of 23 days, the lighthouse was moved 2,900 feet to its present location. This version of the Cape Hatteras Lighthouse stands 198.49 feet tall, making it the tallest brick lighthouse in the US.

There have been many changes and even moves in the history of this lighthouse, making it a fantastic place to visit with lots of history and intriguing stories to hear.

Lighthouse climbers should expect seasonal operations. Dates and hours were not available at the time of publication because of interior paint restoration work. When open, tickets are $8 to climb, $4 for children and seniors.  https://www.nps.gov/caha/planyourvisit/chls.htm

The next stop in this lighthouse adventure is Ocracoke island. You get there by taking the ferry from Hatteras. You’ll travel with your car on this trip! 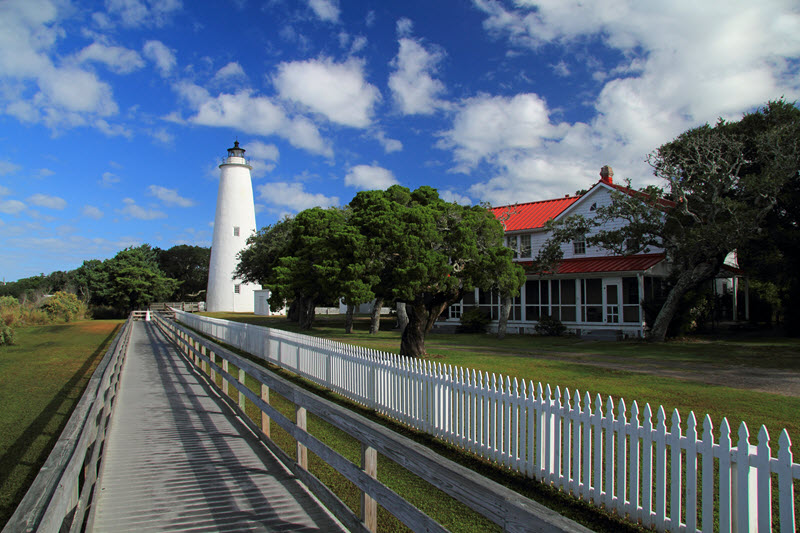 Take the ferry from Hatteras to the island of Ocracoke and picturesque lighthouse there.

Although the Ocracoke Lighthouse is the shortest in the Outer Banks (it’s only 65’ tall), it’s still a beautiful spot to visit!

The Ocracoke Lighthouse does not allow visitors to climb to the top, but gorgeous photos can still be taken on site. Visitors also enjoy peeking at the historic lightkeepers’ quarters.

Massachusetts builder Noah Porter built the Ocracoke Island Lighthouse in 1823, making it the oldest operating lighthouse in the state. Today, the lighthouse’s beam can be spotted up to 14 miles into the Atlantic Ocean.

Now that you’ve driven the length of Ocracoke, you can confirm it’s an island. You’ll need another ferry! This time you’re headed to Cedar Island. Pack some snacks and drinks and find a comfy sitting spot because this is a long trip.

On your way out of Ocracoke you’ll pass by the small island of Portsmouth. As you arrive at Cedar Island, keep your eyes peeled for the “wild” hurricane surf cows. And you thought the wild horses were something! Cedar Island residents don’t know where the cows came from (or at least they aren’t telling). The herd has narrowly survived hurricanes which washed some of the animals out to remote islands, only to be rescued days later by good sa-moo-ritans. 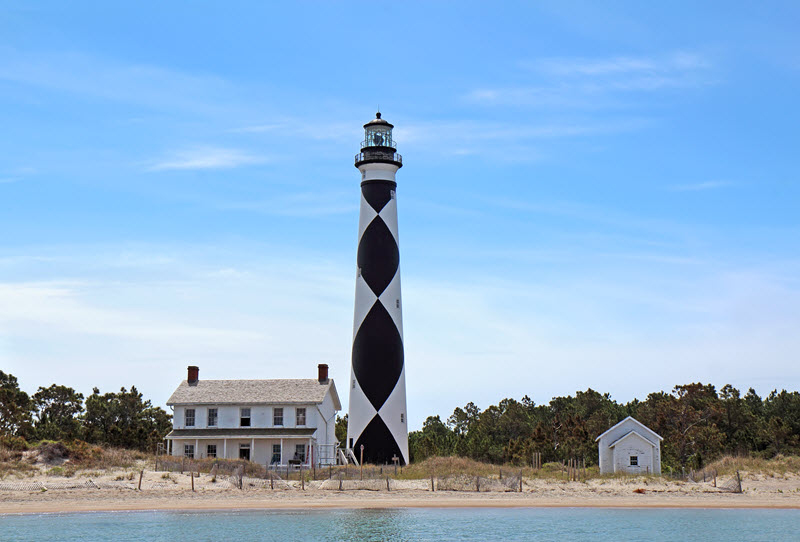 Here’s a trip for the most intrepid lighthouse climbers – make your way to the visitor’s center on Harker’s Island, then find a ferry to get you over to the lighthouse.

The Cape Lookout Lighthouse is known for being one of the hardest lighthouses to reach. Due to its remote location along the seashore, the only way to visit this lighthouse is by ferry or personal boat. The map at CarolinaTraveler.com takes you to the visitors center on Harker’s Island and the ferry service next door. You’ll see the lighthouse across the water from the visitors center.

Standing at 163’ tall, Cape Lookout Lighthouse is one of the few lighthouses that operates during daylight hours.

The current lighthouse was built in 1859. It’s original tower, built in 1812, was then converted into the keepers’ quarters. Today, visitors can climb to the top of the tower, thanks to some reconstruction efforts in the early 2000’s. In fact, the public wasn’t allowed to enter this lighthouse until July 2010.

The Cape Lookout Lighthouse is currently closed to the public while it undergoes renovations for structural issues. The renovations are expected to last until winter of 2023.

Take the ferry back to your car – you have a long drive coming up and you have two more lighthouses to see! There are plenty of places to see and things to do between Harker’s Island and your next stop. You can find things to do at CarolinaTraveler.com. 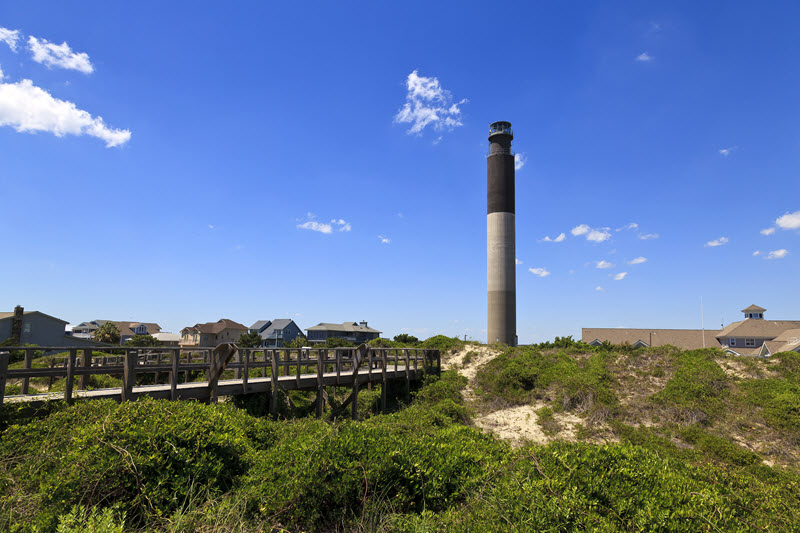 Currently free to climb, the lighthouse at Oak Island offers a different challenge. Climbers must scale a series of ship ladders, rather than stairs.

Completed in 1958, the Oak Island Lighthouse has been located on a US Coast Guard Station property since 1930. The US Coast Guard recently had to reconstruct their building after a fire destroyed it in 2002.

Unlike most historic lighthouses, there is no winding staircase inside the Oak Island Lighthouse. Instead, there are a series of ship’s ladders on the inside with a total of 131 steps. This makes a climb to the top a bit more difficult than some of the other lighthouses on this road trip, and visitors must be over the age of 9 to head to the top.

Climbs to the top are free, but require advanced planning and reservations. Carefully read the directions found on the lighthouse website http://www.oakislandlighthouse.org/. 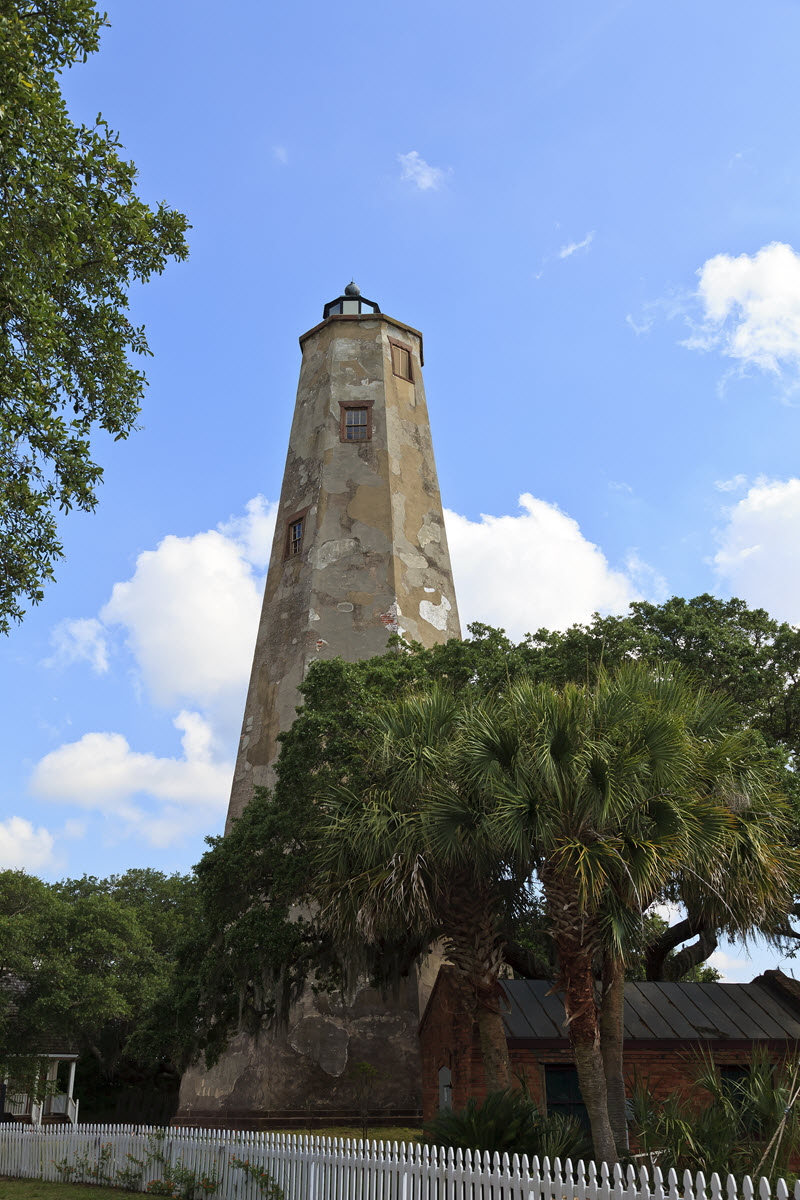 Lovingly called “Old Baldy”, the Bald Head Island Lighthouse is the oldest lighthouse still standing in NC. The lighthouse took two years to complete and was first activated in 1794.

Today, visitors can climb to the top of Old Baldy with self-guided tours. The 108-step climb is worth the stunning views of the Cape Fear River Estuary at the top. This is another Lighthouse only accessible by ferry, which can be taken from Southport, NC.

The Smith Island Museum of History, housed in the keeper’s cottage, educates visitors about Bald Head Island’s historical significance. Inside the museum, artifacts from the Old Baldy Foundation’s collections are on display.

Tickets to climb are $8, $5 for kids. Old Baldy keeps spring and summer hours, generally 9-5, but check the website for current hours. www.oldbaldy.org

Before heading out on your road trip, be sure to remember these tips and tricks: