Eleven lighthouses are scattered along the 187 mile South Carolina coast. Most of these lighthouses are no longer active and a few aren’t safe for entry, but that doesn’t mean they aren’t worth a visit. In fact, a perfect way to spend a long summer weekend is by hopping in the car and doing a road trip that hits all of the major South Carolina lighthouses. Luckily, we’ve mapped out the must-see lighthouses for you.

In total, the travel time between each lighthouse on your road trip is approximately seven hours. But, we’d suggest making a few longer stops along the way. An overnight in Hilton Head is sure to be fun for the whole family. Or, you could spend a few extra hours in the Charleston area and enjoy their amazing cuisine. No matter how you decide to complete the road trip, there’s plenty of great photo ops.

The SC lighthouses map below shows your route to view seven lighthouses and can be followed along here. We’re sharing details about each stop on along your journey below. 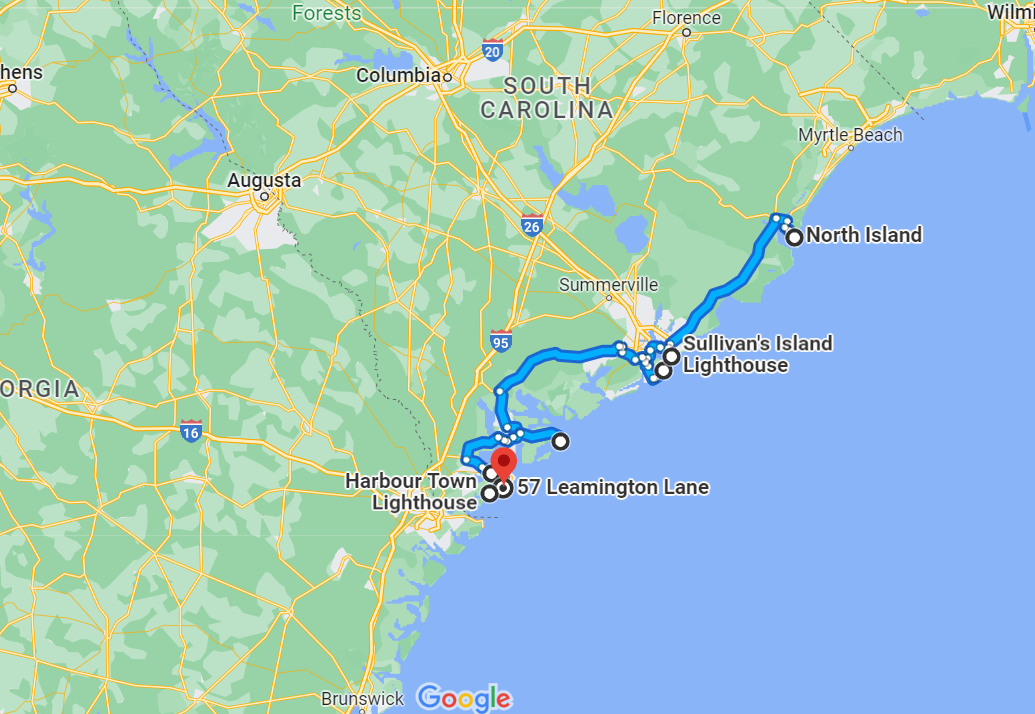 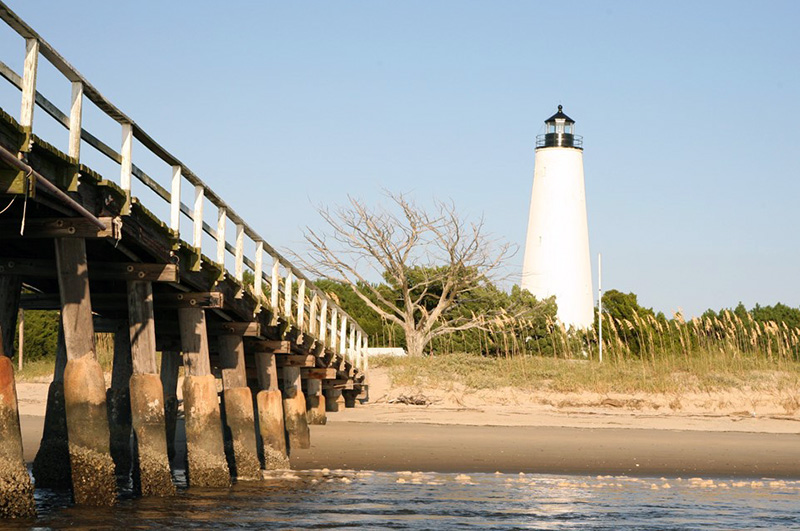 The lighthouse tour kicks off with a bang; the Georgetown Light is the oldest lighthouse in South Carolina. Plus, it’s an a remote location, making for a fun adventure to start the journey. To reach this historic landmark, you’ll need to book a boat tour. Two companies offer trips that provide views of Georgetown Light: Rover Tours or Cap’n Rods Tours. A cruise by will allow you to snap some stunning photos.

The Georgetown Light is located on North Island by the Winyah Bay and southeast of Georgetown, SC. The original lighthouse was destroyed in a storm in 1806 but was restored six years later. Now, the lighthouse is 85 feet high and is maintained by the US Marine Corp. The lighthouse is not open to the public for tours. 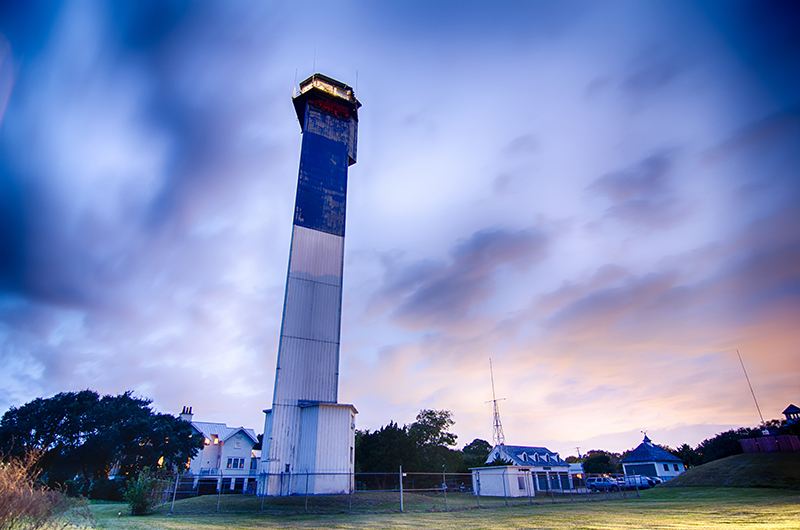 Sullivan’s Island Lighthouse, also known as “Charleston Light”, has a very unique look. Instead of the typical round build of a lighthouse, the Charleston Light was constructed in a triangular shape. The lighthouse is 140’ tall and has a distinctive black and white color blocking.

As one of the newest lighthouses in the country (finished in 1962), Sullivan’s Island Lighthouse still functions with regular maintenance by the Coast Guard and the National Park Service.

Due to safety concerns, this lighthouse is not open for the public. However, the surrounding beach is open and visitors enjoy strolling around the outside while snapping photos.

One of the more unique lighthouse sightings is off the coast of Folly Beach. The Morris Island Lighthouse stands tall right in the middle of the water. After years of erosion, the lighthouse has been stranded in the sea for several decades.

While this has lead to a visually striking appearance of the Morris Island Lighthouse, it’s also left the landmark in a precarious position. For this reason, visitors are not allowed in the lighthouse.

The Morris Island Lighthouse was originally constructed in 1876 and functioned for South Carolina residents and mariners until 1938. The erosion of Morris Island was what lead to the late construction of the Charleston Light (the previous stop on your tour). 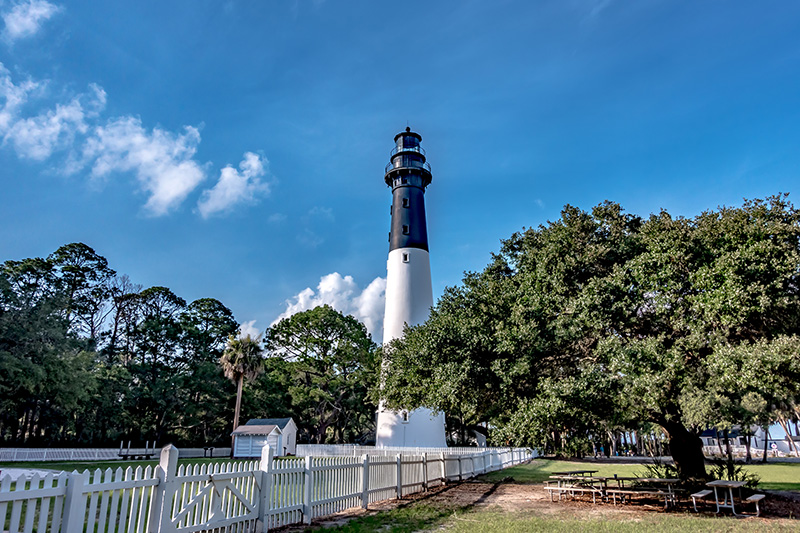 The original lighthouse was built in 1859 and had to be reconstructed in 1875 after it was destroyed in the Civil War. Beach erosion caused the need for relocation and the lighthouse was moved 1.3 miles inland in 1889. Although it is no longer in operation, the legacy lives on. During it’s time, the Hunting Island Lighthouse beam could be seen for 17 miles. 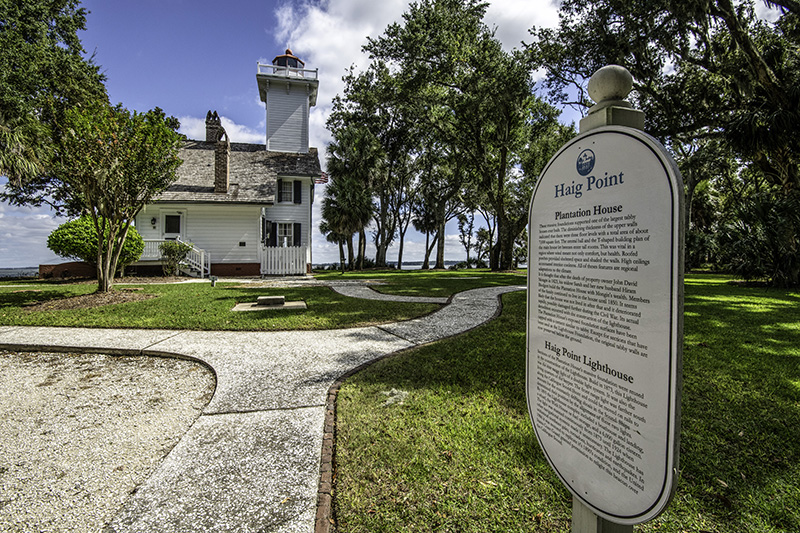 More adventure awaits as the road trip continues to Haig Point Lighthouse. Similar to other SC lighthouses, Haig Point is only reachable via ferry or boat. Located on Daufuskie Island, this lighthouse offers one of the most unique experiences. Guests can stay the night in this quaint little lighthouse turned bed-and-breakfast.

Original construction was completed in 1873. For decades, the 40’ light guided seamen in and out of the busy port of Savannah. The lighthouse was restored in the 1980s.

For those who don’t wish to stay overnight in the lighthouse, the ferry still runs throughout the day and tourists can visit Daufuskie Island to catch a glimpse of this unique site. 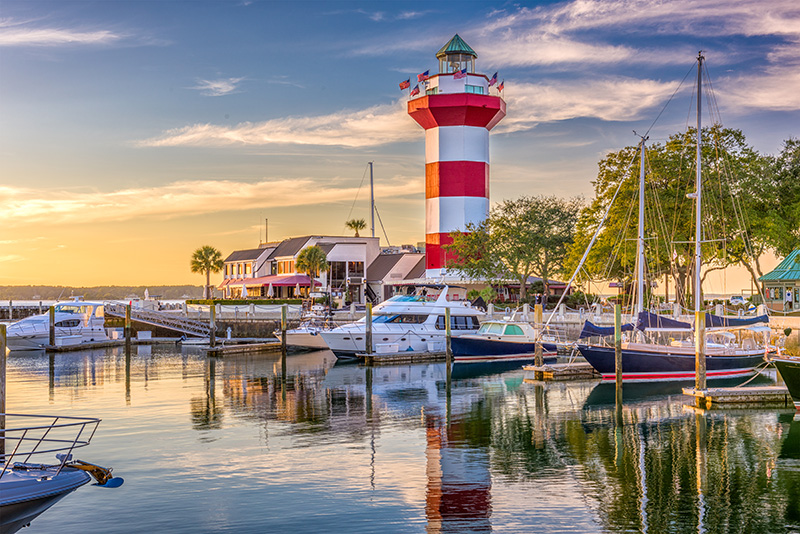 This popular attraction might stand tall, but it never fully functioned as a lighthouse. Instead, it was built as a personally financed decoration. The lighthouse is located on Hilton Head Island and is recognizable with it’s red and white stripes. The tower does still light up and visitors are allowed to climb to the top.

The Harbour Town Lighthouse is 93’ tall and offers incredible views from the top. 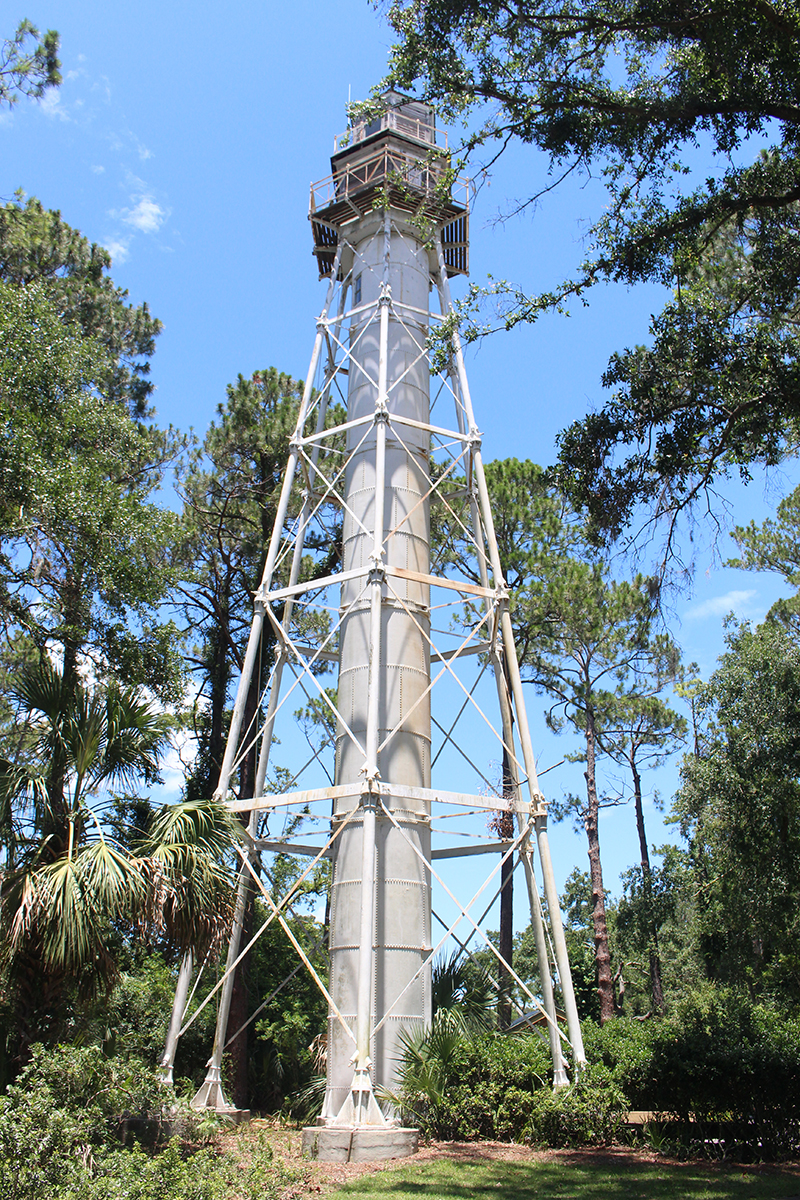 Also on Hilton Head Island, you’ll find another unusual lighthouse called the Leamington Light. This structure is a rear range light, meaning that it is not overlooking the ocean. Instead, this structure lights up a gated community and a golf course.

Leamington Lighthouse was built by the US Lighthouse Board in 1879. Standing 87’ tall, this structure is built of cast-iron and stands on six concrete piers.

It was named to the National Register of Historic Places in 1983. The neighborhood honors this historic site by allowing visitors to cruise by for photos. Simply tell them at the gate that you’d like to see the lighthouse and snap a few pictures, and they’ll let you drive through.

You don’t want to pass up on this road trip full of history, adventure, and beautiful views. If you and your family can’t get enough of the lighthouses, be sure to check out the North Carolina lighthouse road trip here.