Charleston owes much of its cultural appeal and economic success to the contributions and efforts of Black Charlestonians. Philip Simmons, Denmark Vesey, and Robert Smalls exemplify the creativity, courage, and camaraderie central to Black culture in the Lowcountry. An expert craftsman, a slave rebellion leader, and a Union military hero, their stories are often left out of history books and horse-driven carriage tours.

While most people flock to area beaches in the warmer months, January through March provide a window to explore some of Charleston’s lesser-advertised attractions. Follow along this three-day itinerary where stories of Charleston’s Black history heroes will weave you through iconic landmarks, restaurants, and cultural sites. Featuring activities and spaces not often highlighted in major travel publications, these local attractions encourage visitors to delve deeper into Charleston’s complex and rich history. Don’t bother counting your calories on this trip – there’s a reason Charlestonians call their rice Carolina gold!

From South of Broad to NoMo

It only makes sense to start a downtown Charleston exploration at the literal old gates of the city: South of Broad, where the waters of the Charleston Harbor pound the Battery sea wall. Flanked by an avenue of art galleries, the South of Broad neighborhood also boasts White Point Gardens, an oak-fringed public park at the peninsula’s tip.

It’s certainly possible to meander through the South of Broad streets for hours, taking a pause to wonder at the city’s oldest and most ornate historic homes. You’ll find a host of ironworks artist Philip Simmons’ wrought-iron gates along Meeting Street, Stolls Alley, and Broad Street itself. A full blacksmith by the age of 18. Simmons was awarded a National Heritage Fellowship in 1982 and continued teaching younger blacksmiths well into his later years. An interactive map will point you to areas of downtown and South of Broad where Simmons’ wrought iron gates are still functioning and kept in immaculate condition. 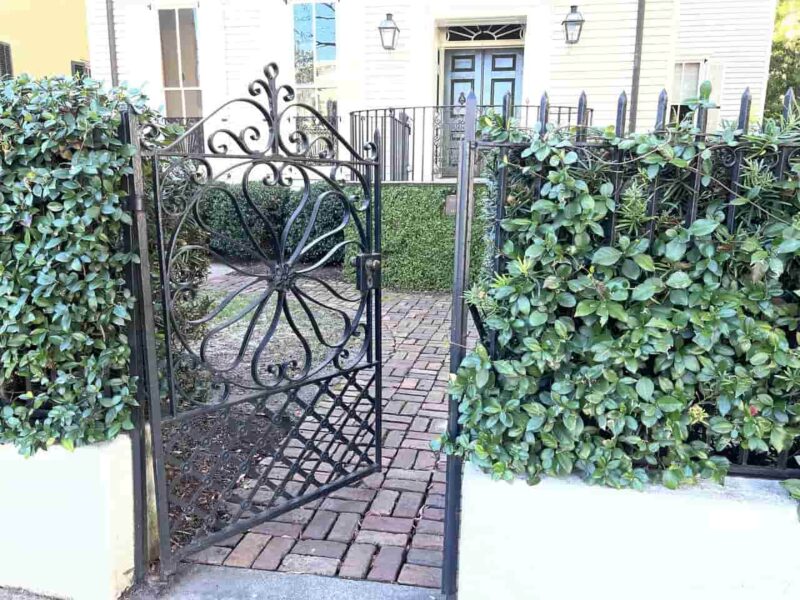 On workdays, Broad Street cafes teem with patrons. Tour guides, students, shift workers, and entrepreneurs intermingle at popular neighborhood joints like the Blind Tiger Pub and Brown Dog Deli. Gaulart & Maliclet, known fondly by locals as “Fast and French,” is a hole-in-the-wall French bistro with rotating lunch specials that hit the spot and come with a glass of French house wine, a cup of tea, or a mug of coffee, all for $15. If you’re seeking delicious sandwiches sans noise, you can always take croissants or charcuterie boards to-go and set up your picnic blanket at White Point Gardens while you enjoy the sailboats gliding across the harbor. 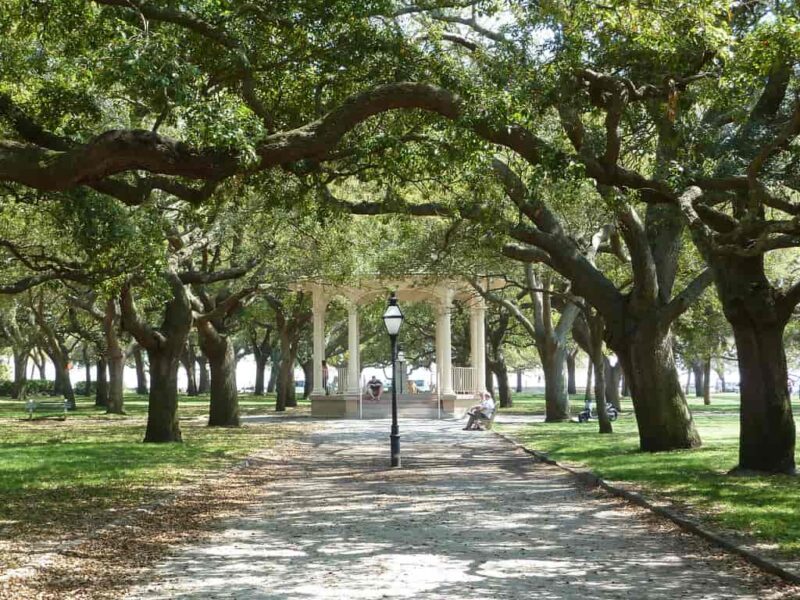 Enjoy a picnic under oak trees at White Point Gardens

Later in the afternoon, Professor Damon Fordham leads inquisitive visitors on a tour of downtown featuring “The Lost Stories of Black Charleston.” Participants will stop at sites like the Heyward-Washington House and Old Slave Mart Museum to learn about the courageous acts of resistance performed by some of Charleston’s least-known Black history protagonists. Discuss your insights from the day over a mouth-watering tray of Rodney Scott’s Whole Hog BBQ. Scott’s pitmaster style involves cooking whole hogs low and slow while periodically smothering them in succulent sauce. The catfish is another sleeper on the menu – well-seasoned and golden-fried, you can order it in a sandwich or as part of a platter accompanied by classic sides like cornbread and collard greens. 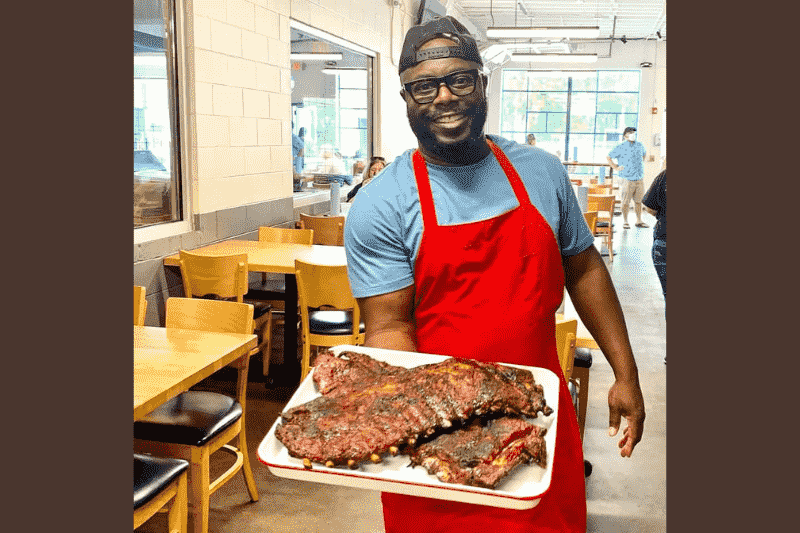 The spirit of revolution

One of the best spots to spend an afternoon in Charleston is a virtual unknown to visitors. Hampton Park is the largest park in downtown Charleston. It retains a fascinating history, having served as a plantation, horse-racing course, zoo, Civil War POW camp and soldier cemetery, and the site of the South Carolina Inter-state and West Indian Exposition of 1901-1902. At the end of the Civil War, most white Charleston residents had fled in fear of Union forces, but formerly enslaved people remained in the city. Hampton Park is the site of the first Memorial Day in the United States, where 10,000 Black Charlestonians of all ages, along with white teachers and missionaries, conducted a funeral procession and parade on the race course. 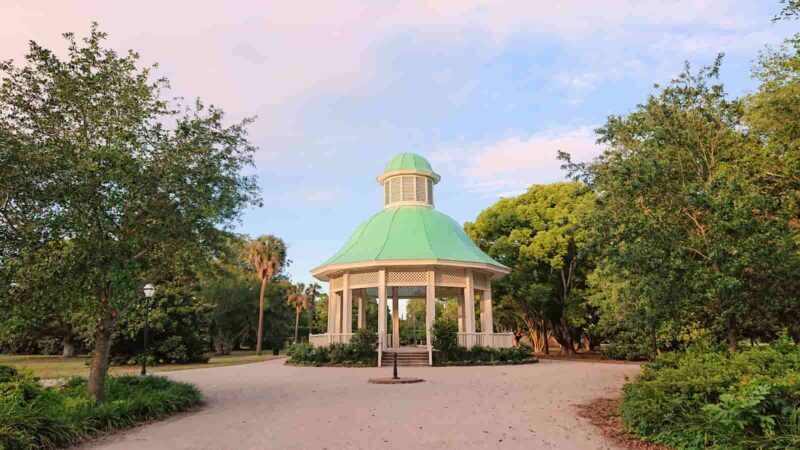 Stroll along the meandering paths throughout Hampton Park

Today, the park is a top spot for picnics, kite-flying, and enjoying the beautiful gardens. It features a cross-training trail, a rose pavilion, a duck pond with a fountain, and a newly refurbished statue commemorating Denmark Vesey, an iconic Charleston hero with an oft-maligned legacy.

Also known as Telemaque, Denmark Vesey was a free Black man and community leader in Charleston who attempted a major slave revolt in 1822. His goal was to kill Charleston slaveholders, free the enslaved people, and sail to Haiti, a newly-established and independent Black republic. While Vesey was captured before he could carry out his plan, the incident shook antebellum planters to their core. Vesey and his co-conspirators were hanged on July 2, 1822, but his legacy lives on in Charleston. 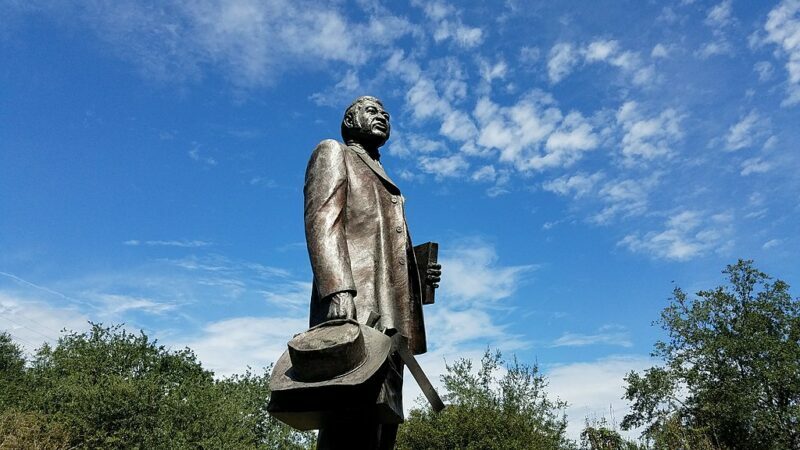 Linger longer in the park with a picnic to go – the crab and shrimp rice platter – from nearby soul food stunner Hannibal’s Kitchen. Hannibal’s was established in 1985 by Robert Larence Huger, aka “Hannibal,” a Black entrepreneur and leader in Charleston. Named after the African general who defeated the elite Roman forces, Hannibal Huger has invested in community initiatives like the Eastside Neighborhood Council Community Cookout and the Philip Simmons Basketball and Midnight Basketball Programs. The field adjacent to Denmark Vesey’s statue is ideal for kicking a ball, throwing a frisbee, or playing croquet or bocce ball.

If you’re up for more history, a visit to the International African American Museum will grant access to The Center for Family History, where novice and advanced-level genealogists can examine primary sources to learn more about their connections to African ancestors. The African Ancestors Memorial Garden will be free and open to the public. Facing outward into the Charleston Harbor, the space will feature an evocative infinity fountain on the edge of the wharf and a soundscape honoring eclectic African languages and performances. While the anticipated opening of the museum was recently delayed, it is still slated to open to the public in the first half of 2023, and shows all signs of becoming one of the next major tourist locations in the southeast.

Check off the last remaining Philip Simmons ironworks sites from your scavenger hunt list while you’re at the IAAM. A promenade from Liberty Square to 33 Chapel Street and 91 Anson Street is under a mile. It will take you through the Chapel Street Fountain Park and Mother Emanuel AME Church, the oldest African Methodist Episcopal Church in the Southern United States with one of the oldest Black congregations south of Baltimore. 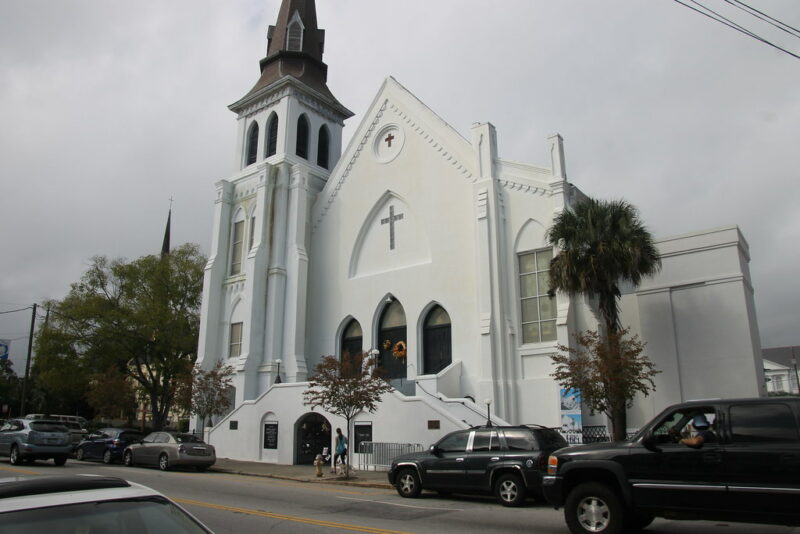 Gaze up at the tower of the Mother Emanuel AME Church on Calhoun Street, a central artery of downtown Charleston

After an action-packed Saturday exploring Charleston Black history, you’ll likely be craving a relaxed environment to discuss the highlights of your day. Park on King Street and walk to Graft Wine Shop for some of the best vintages in Charleston. If you’re lucky, co-owner Femi Oyediran will be working the bar, and you can ask Charleston’s sole Black sommelier for some of his current recommendations. Not even 100 steps away, you can stroll down to Leon’s Fine Poultry & Oyster Shop for succulent briny oysters shucked at close range, piping hot hush puppies served with soft honey butter, and a perfectly-breaded fried chicken sandwich. You’ll be sure to sleep well that night!

Bounty of the sea

A visit to Charleston wouldn’t be complete without an experience on the water. Thankfully, winters in Charleston are hardly anything to bundle up for, and there are plenty of ways to explore the coastal ecosystems without taking on the windy seas.

For your last day in Charleston, we’re sending you to a private dock on the peninsula for Casual Crabbing with Tia – one of the best-kept secrets when it comes to fun things to do in Charleston. Book a reservation at 9 AM, where you’ll meet crabbing extraordinaire and Charleston native Tia Clark. Tia will lead you on a hands-on excursion to catch crabs using a cast net and other techniques. Sure to be a fun and engaging experience for all ages, you can even keep a legal-sized crab and ask the culinary team at the nearby Charleston Crab House to cook it up for you! 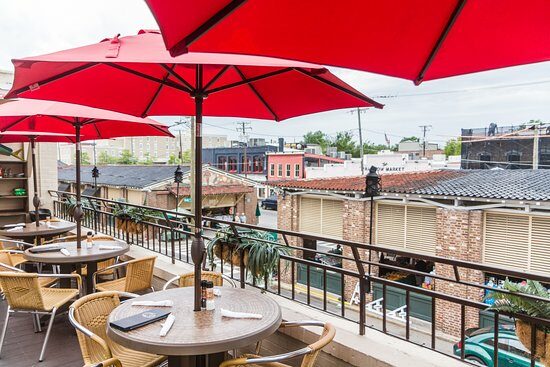 Enjoy Market Street people-watching from the balcony of Charleston Crab House, where they’ll cook up your freshly caught crab

If you have an off day and don’t catch as much as you’d like, or you’re just yearning for more delicious seafood, make your way over the bridge to James Island, site of one of the most exhilarating stories of the Civil War in the Lowcountry.

In May of 1862, the enslaved man Robert Smalls took command of the CSS Planter vessel on the Stono River, which cuts through James Island. Disguised as a boat captain, he sailed the Planter past five Confederate harbor forts without garnering any suspicious attention. Eventually spotted by a Union ship, Smalls surrendered the Planter and became a Union hero. He eventually returned as a free man to attack Fort Sumter, a major Confederate military base off the coast of James Island, as a pilot of the USS Keokuk. 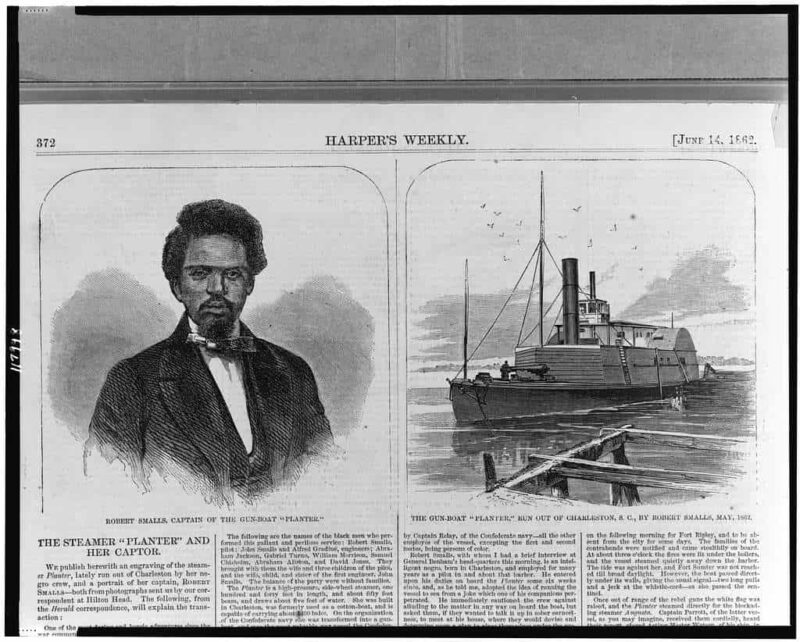 As you drive under the large oaks that reach their branches over both sides of Folly Road, it’s easy to imagine what James Island looked like before it became populated. Gillie’s Seafood, owned by successful Black Charleston chef and restaurateur Sean Mendes, prepares food of an equally transformative caliber, and is one of the best places on the island to get authentic Gullah Geechee cuisine. Enjoy the fruits of his grandmother’s home-cooked recipes, with southern staples like okra gumbo, deep-fried “Soul Rolls,” gator bites, and Catfish Charleston, a blackened catfish filet smothered in shrimp and crawfish cream sauce served over dirty rice.

Those with a little more time to spare before they head home should consider a short visit at McLeod Plantation, just down Folly Road from Gillie’s. Known as the only Lowcountry plantation to convey the history of slavery through a Black perspective, McLeod Plantation offers interpretive tours focused on sea island cotton cultivation, Gullah/Geechee culture, and slavery resistance. Tours are first-come, first-serve, and self-guided. 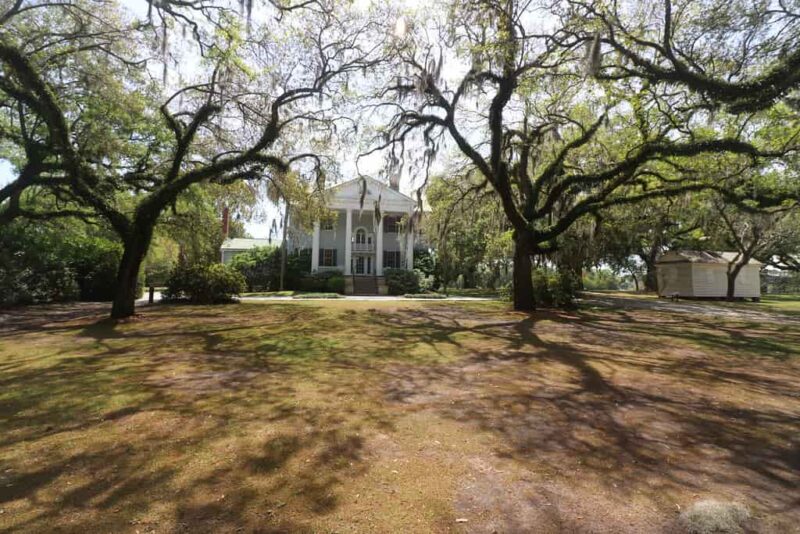 Take a self-guided tour at McLeod Plantation on James Island

The attractions in this itinerary represent merely the tip of the iceberg when it comes to Charleston Black history. Winter, spring, summer, or fall – any time is a good time to return through Charleston’s gates to satiate the cultural yearnings of your body, mind, and soul.